It is fun to get to know more and more of the little special-habits of new friends. And after cycling on my own since Boston I appreciated that even more than usual.

Cindi (the brain) did the most work planning their route from Maine to Washington State. She is the most experienced cyclist of the group – and even very into the mechanical aspect of the whole thing. With her 66 years she is able to bring really a lot of power on the road – she broke the wind on our 32-mile-sprint to the ferry and I had to pull myself together to stay close to the group. She documents their trip in her blog that I enjoy to follow.

Katy made me laugh so often. Her goal is to ” make people talk about you during their lunch”. Due to that she greets everybody, makes the semi-trucks honk their horns for us and it is really impossible not to be recognized in a small town as long she is part of the group.

Emmy loves to climb hills on her “little big blue giant”. I loved our talks about so many things and to witness her how she took the final shots for her big “Roadkill-Post” on her own blog. It is worth to take a look at the captures! 🙂 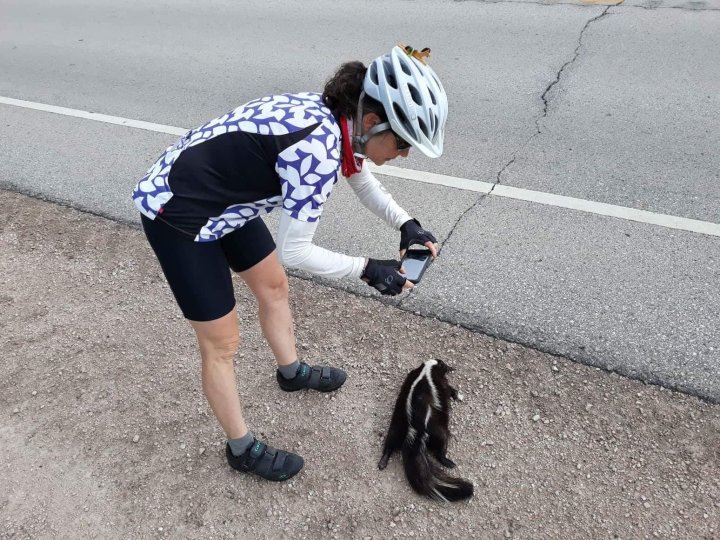 Laura is the baby of the family. She is more quiet – but if she makes a joke you can be sure it is a bullseye (another one bites the dust as a caption for a roadkill-picture – hahahaha). She appreciates good laundry-facilities and so takes care that everybody keeps clean 😉

Jane joined the group for three days with her racing-bike and her hammok. She is a friend of Katy, a real kickintheass and we stayed at her house in Oshkosh for one night (her husband Michael prepared a steakdinner, I talked german to her awesome son Dave, nice talking to Janes friend Carola, a real american-movie-neighbourhood) 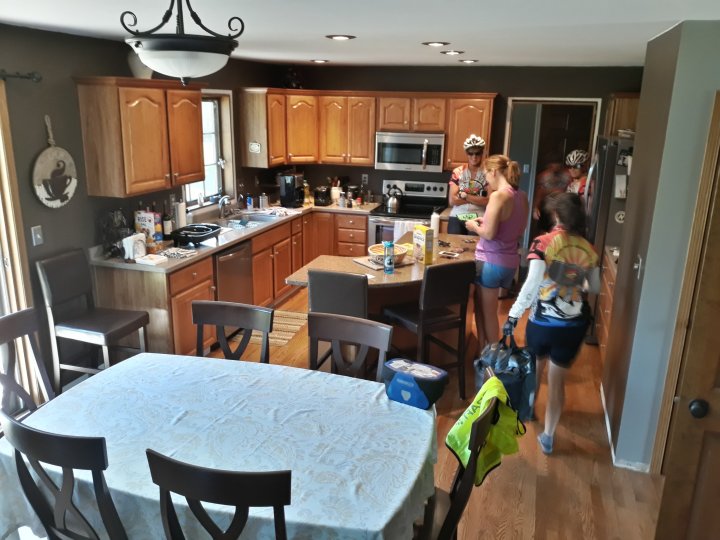 When I stuck my head out of my tent – proud to be awake before 6:00 – most of the sisters usually had already their helmets on. Their days start early!

On thursday a police-car with full lighting console stopped us as we were riding along the highway. Some people called 911 and complained we were holding up the traffic. As the approaching officer was able to see that we only used the shoulder the whole thing turned out to be no big deal and so we posed for some pictures:

The Spinning Sisters start their days with a prayer in the morning before the group hits the road. For me those were touching moments and a good way to raise my awareness for the time I spend on my journey and for the fact how blessed we all are to be healthy and free to do those things 🙂

After 3 1/2 days we had to say goodbye. They are proceeding along the “Northern Tier” to North Dakota while I am going straight west from now on. My next big goal is the southern entrance to Yellowstone National Park. But we have a chance to meet again in Glacier National Park by end of July.

Those were some sad first miles against the wind and on my own again – thank you Spinning-Sisters for great times! 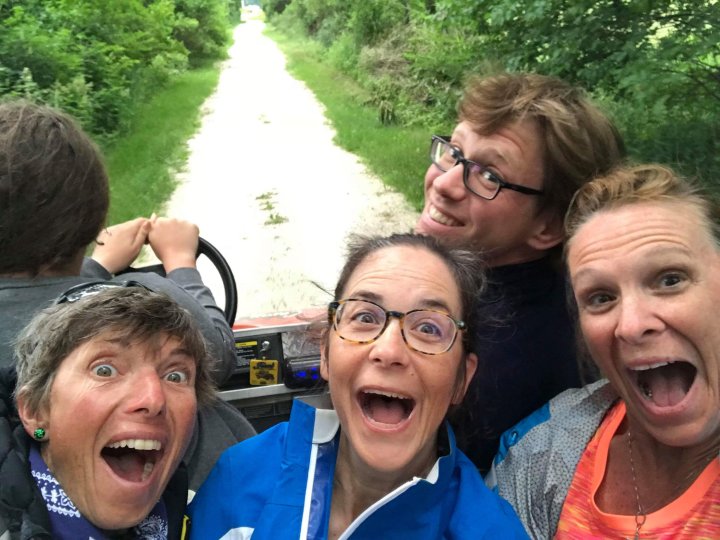 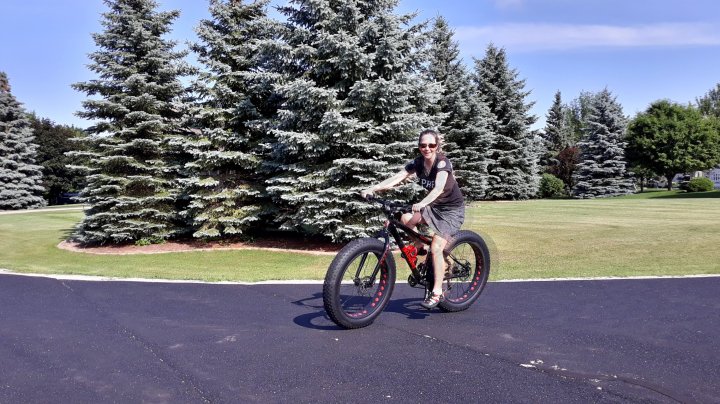 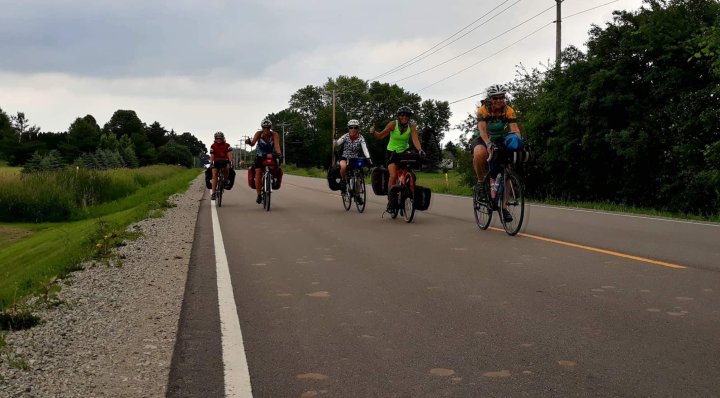 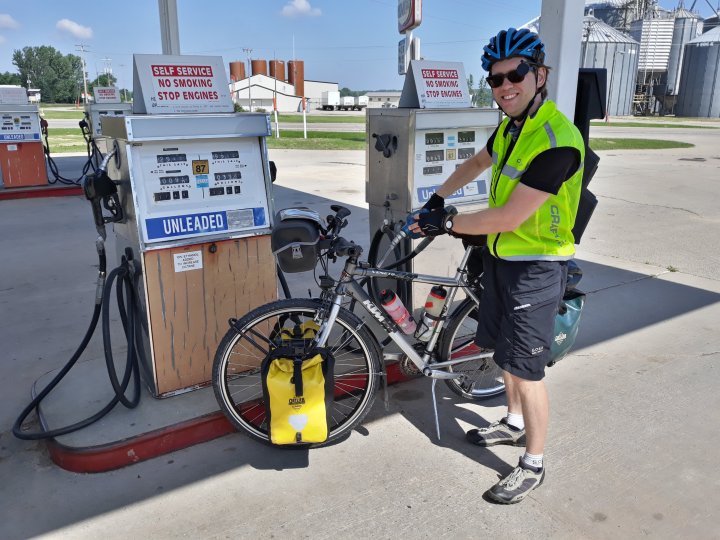 I heard wolfs howling yesterday in the early morning.
The heat during the last two days was enourmos – on friday I ran completely out of water for 14 miles … I have to carry more, 3 liters are not enough.

I crossed the Mississippi and are in Minnesota now. 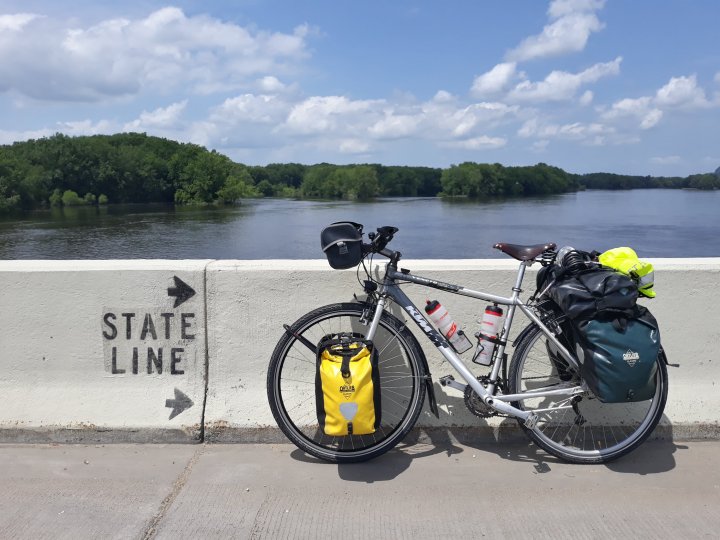 Minnesota welcomed me with a big cow and an even bigger thunderstorm.

That made me stay in a Motel for another night. But that turned out to be well invested money as there were heavy rains during the whole night. 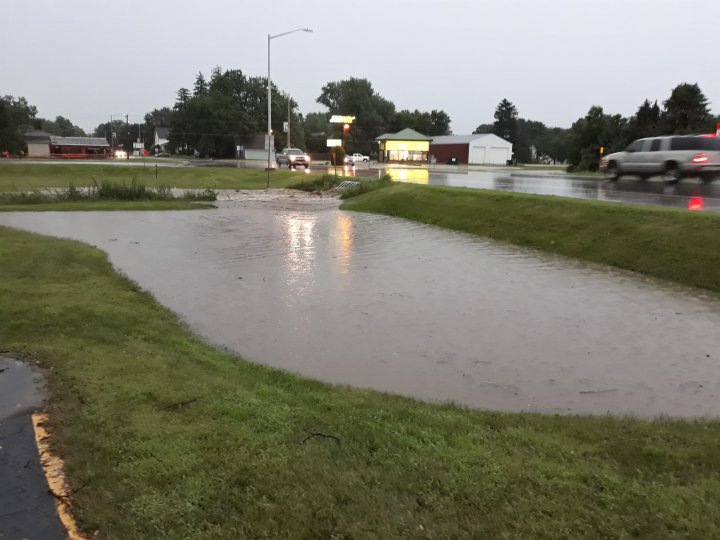 As today began with continuing heavy rain I slept in for a while. Now, after 20 miles and two strong showers I am waiting for the sun in Rochester as I am writing these lines at McDonalds …

3 thoughts on “Becoming a “Spinning Brother””